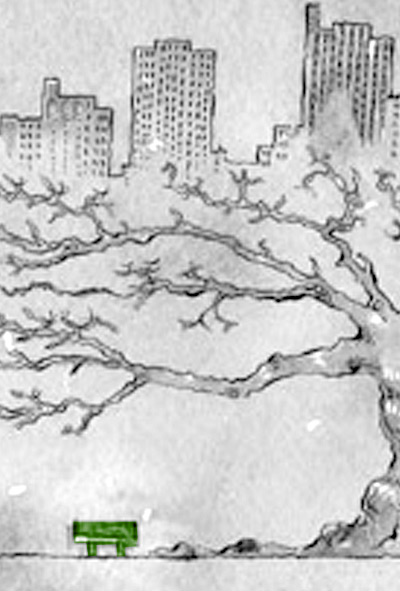 This story doesn’t have any snow-covered belfries, or high-legged horses in the stone-walled fields, or snowstorms walling us in, or single-bar electric heaters, or terrible high-rise lifts that do not work, or suicides, or crazy aunts dropping lit cigarettes into the deep folds of the sofa. Rather, this is a story of an ordinary Christmas in an ordinary house at an ordinary time in the extraordinary glamour of childhood.

The Irish novelist Ben Kiely has said that every corner is a world. My world back then, in the early 1970’s, was a house on the corner of Clonkeen Road and South Park, near Deansgrange, where I used to think nothing that bad happened or, if it happened at all, it never much happened to me.

I had, I suppose, a novelist’s worst childhood – it was happy.

Up from the cold dark of winter days, Christmas Eve unfolded into Christmas Day like a dolphin-leap of delight. The holly was clipped from the bush in the front garden. The mistletoe was sellotaped over the front door – eight years old, I sidled away, thinking I’d have to kiss my sisters. The postman arrived with more cards to hang up. They were strung on lengths of crepe paper around the house. The turkey at least gave me a boy’s adventure – dead as the bird was, he still needed his neck chopped and he was taken into the back garden, flopped out on a piece of wood, taken care of by my father. We peeped down from the gap in the upstairs curtains. I whispered to my younger brother that it was his neck on the block — or was that my older brother whispered it to me? And then the turkey was brought indoors and plopped in the sink and the jokes were made about stuffing it.

Christmas Eve.  The darkness fell with a thump.

Shoes to be polished. Home-made puddings to be taken down from the top shelf. Mince pies arranged in the biscuit boxes. The carefully-iced cake was taken out from the room under the stairs. I had to have a bath of all things – the second in a week, no grumbling allowed. And then I padded downstairs in my soft warm pyjamas to write the note for Santa. Dear Santa I want a Stoke City jersey and peace in the world. We put three mince pies on a plate, some fruitcake, and poured a good measure of whiskey, the bottle label which I loved, three swallows in flight, and then it was up the stairs thinking I know why Santa is fat but how come he never gets drunk? It was questions like that which occupied my mind and sent me to bed quite sure I’d never ever ever fall asleep, never, because of the tinkling of bells outside, never, because of the creaking of floorboards downstairs, never, because of … never,  never —

Christmas Day rose with a thin reef of stars over the suburbs.

I pulled back the sheets and tiptoed on the cold of the bedroom floor. Outside the grass was wet with dew and there was not a hint of snow on the ground, but who cared? “Mum!, Dad! It’s Christmas!”   Down the stairs my younger brother, Ronan, and I leaped at least eighteen steps at a time — quite an achievement since there were only fourteen. Onto the cold kitchen linoleum he and I stepped, no shoes, no socks, no slippers. Around us the whole house had begun to crackle awake. My older brother Sean turned the banisters. My older sisters, Siobhan and Oonagh, would soon erupt in a tearaway scramble for the bathroom but right then they were playing hide-and-go-seek with sleep. Up the stairs Ronan and I went to terrorise them.

“Hurry up, hurry up, it’s Christmas!”

Mum and Dad began to stir into that lovely silence that surrounded them every  Christmas morning and they came downstairs in dressing gowns to guide Ronan and I  towards the fireplace. There was only one chimney, but it backed into two rooms. Terrible theatrics at first, since Santa Claus had a penchant of moving from one fireplace to the other – “No, oh no! Santa didn’t come!” – and then we turned the corner where he had, god-bless-him, eaten not only the mince pies and the fruitcake but he’d taken good care of the large glass of Powers too. Not only that but he left a thank-you note, and I leaped about in my Stoke City shirt screaming that I had been a good boy after all, imagine that, I had.

Christmas morning — the white radiators clicked and the house began to heat.

We jumped around like prayers in an air raid, which reminded us, sadly that we had to go to Mass before opening the other presents. Baby Jesus was put in the crib. The Three Wise Men were re-positioned. And then it was on with the best clothes, neatly ironed, and we piled outside into the still-dark morning, cold enough to stun the bones in our cheeks. We jumped, all seven, into the gold Vauxhall Victor, no seat belts, no car seats and yes those dolphin-dreams of the rest of the day. It was an early mass in Cabinteely, eight o’clock. Father George was famous for his lightening speed and grumpiness and all homily long we dreamed of the presents under the tree. The priest droned on in a language we never understood. Afterwards the light was of the quality that no dark could ever match.  We skipped through Cabinteely Village towards the car, slid in and bantered all the way home.

Christmas breakfast was a time to watch the clock turn.

Sizzling bacon. Eggs. Steaming tea. Toast slathered in too much butter. And strangely there was no kicking under the table, no belching across the breakfast plates, no licking of the opposing sibling’s teaspoon, there was harmony in the household since we were held aloft by the prospect of presents, stacked this-way-and-that under the shedding tree. “Let’s go!” And we gathered around, opening the presents one-by-one. The fashionable orange sweatshirt (or so I thought). The Shoot! annual and Roy of the Rovers book and a new Subutteo team. A bike for Ronan. A new perfume for Siobhan and a soft clip on the ear for telling her that now she’d smell good. A Dolphin Discs token for Sean. And a scream of delight when Oonagh opened up a package to reveal a Bay City Rollers scarf, of all things.

There are no days more full than those we go back to.

All those Christmases collide into each other and my memory is decorated by a series of mirrors flashing light into chambers of sound and color – the blue of the sky (even when it wasn’t blue, it seemed blue), the briquettes sparking red-layered on the fire, the crinkling of the ridiculous yellow paper hats at dinner time, my mother singing at the stove, The boys are all mad about Nelly, the dining room table perfectly laid out, the silverware we’d see only once a year, the bad jokes in the crackers, and the other jokes as dinner unfolded, the light outside gradually dimming, a bromide of sorts, and the laughter moving to deep silence at three in the afternoon when we leaned up against one another like old tires, full of turkey and gravy and trifle and god knows how many slices of plum pudding. Still there was enough room left to break the seal on the tin of Quality Street, and then we clicked the batteries into the horse-racing game and the day stretched out in time, so many hours that it seemed endless, infinite, elastic.

Like the afterimage of a light that only by closing my eyes I can see, I glimpse my childhood as it was, and good it was, and spoiled it was, and safe it was, and generous it was, when we did not lack the peace of simple things, when happiness came to us unasked, when there was no end to what we could imagine, when even Santa Claus brought us the possibility of peace. Still they rise and flash, those Christmas days, without apology, without heartbreak or revelation or dilemma — maybe to describe such happiness is to diminish it, but is it enough to say that by the end of the evening we slept and we dreamed.

My father once told me that the best gift he ever got as a child, back in the 1930’s, was a white donkey.  But they lived in a small cottage in Foxrock and had nowhere to keep the animal. Three days after Christmas the donkey was sold again. It was a three-day gift, but he didn’t mind, not even when the money went into my Grandfather’s pocket.

What momentary beauty and sadness: every world with a corner.

And yet I have never thought that the gift, or the story, or even the donkey itself ends there. Rather my mother and father brought that same gift to all the Christmases they gave to us. I used to wonder how I could thank my folks for those days, in the uncomplicated suburbs of Dublin, but in recent years I have learned that there is no way to thank them, really, other than to try to make these moments for my own children, in what I hope are (for them at least) the uncomplicated towers of New York, so that they get passed on in the deep grammar of memory – there are times I am sure I can hear on a cold snowy day the hooves of a white donkey clopping along at the far end of Central Park, and why not?