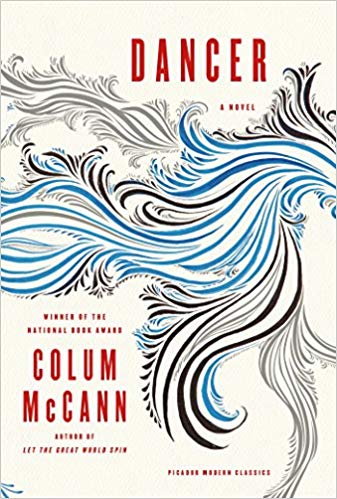 Taking his inspiration from biographical facts, novelist Colum McCann tells the erotically charged story of the Russian dancer Rudolf Nureyev through the cast of those who knew him: there is Anna Vasileva, Rudi’s first ballet teacher, who rescues her protégé from the stunted life of his provincial town; Yulia, whose sexual and artistic ambitions are thwarted by her Soviet-sanctioned marriage; and Victor, the Venezuelan street hustler, who reveals the lurid underside of the gay celebrity set.

Spanning four decades and many worlds, from the horrors of the Second World War to the wild abandon of New York in the eighties, Dancer is peopled by a large cast of characters, obscure and famous: doormen and shoemakers, nurses and translators, Margot Fonteyn, Eric Bruhn and John Lennon. And at the heart of the spectacle stands the artist himself, willful, lustful, and driven by a never-to-be-met need for perfection.

“The goal of a book like this is to catch the spirit of the person and his age. It’s a tall order, and one that Dancer pulls off brilliantly.” –The Seattle Times

“A monumental life…Stylistically, Dancer is a leap itself.” –Los Angeles Times

“An engrossing portrait of a man so complex that no mere biography could possibly convey more than a sliver of his personality….The Nureyev who strides impatiently through its pages seems entirely convincing.” –Terry Teachout, The Baltimore Sun

“Every sentence sounds new and beautiful, no matter how often it’s read.”–USA Today

“Dancer is the most breathtaking tribute to Nureyev since Jamie Wyeth’s famous paintings.” –Esquire