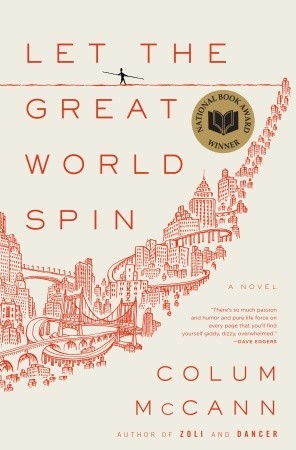 An American masterpiece from internationally bestselling novelist Colum McCann—a dazzling and hauntingly rich vision of the loveliness, pain, and mystery of New York City in the 1970s In the dawning light of the late summer morning, the people of lower Manhattan stand hushed, staring up in disbelief at the Twin Towers…

It is August, 1974, and a tightrope walker is running, dancing, leaping between the towers, suspended a quarter-mile in the sky. In the streets below, ordinary lives become extraordinary as award-winning novelist Colum McCann crafts this stunningly realized portrait of a city and its people.

Corrigan, a radical young Irish monk, struggles with his own demons as he lives among prostitutes in the Bronx. A group of mothers, gathered in a Park Avenue apartment to mourn the sons who died in Vietnam, discovers how much divides them even in their grief.

Further uptown, Tillie, a thirty-eight-year-old grandmother, turns tricks alongside her teenaged daughter, determined not only to take care of her “babies” but to prove her own worth.

Elegantly weaving together these and other seemingly disparate lives, McCann’s powerful novel comes alive in the unforgettable voices of the city’s people, unexpectedly drawn together by hope, beauty, and the tightrope walker’s “artistic crime of the century.”

McCann’s most ambitious work to date, Let the Great World Spin is an unmistakable and triumphantly American masterpiece.

Amazon.com’s “Book of the Year”

“This is a gorgeous book, multilayered and deeply felt, and it’s a damned lot of fun to read, too. Leave it to an Irishman to write one of the greatest-ever novels about New York. There’s so much passion and humor and pure lifeforce on every page of Let the Great World Spin that you’ll find yourself giddy, dizzy, overwhelmed.”–Dave Eggers, editor of McSweeney’s and author of What Is the What

“Now I worry about Colum McCann.  What is he going to do after this blockbuster groundbreaking heartbreaking symphony of a novel? No novelist writing of New York has climbed higher, dived deeper.”–Frank McCourt, author of Angela’s Ashes (See Frank’s full review on Amazon.com)

“One of the most electric, profound novels…in years. Let the Great World Spin is an emotional tour de force. It is a heartbreaking book, but not a depressing one. [It] can feel like a precursor to another novel of colliding cultures: ‘The Bonfire of the Vanities.'” –The New York Times Book Review [NY Times Book Review Podcast is here]

Amazon.com’s 2009 Book of the Year : Colum McCann has worked some exquisite magic with Let the Great World Spin, conjuring a novel of electromagnetic force that defies gravity. The final pages hum with such grace that its memory might tighten your throat weeks later.” –Mari Malcolm (Amazon.com)

“…an act of pure bravado.” –oprah.com

“McCann makes his prose dance across the surface of this ingeniously constructed novel. He is a fearless writer, experimenting with narrative styles, leaping from one story to the next.” – The Telegraph (UK)

“This novel sets out to work on a vast canvas… [McCann’s] success is a measure of the achievement of an audacious and gifted storyteller.” –Dermot Bolger, Sunday Independent (Ireland)

“An astonishing balancing act by a great writer prepared to take risks. A book to treasure.” –The Daily Mail (UK)

“[A] marvelously rich novel. Through a Joycean tangle of voices… he weaves a portrait of a city and a moment, dizzyingly satisfying to read and difficult to put down.” –Seattle Times

“More tellingly [McCann] is that rare species in contemporary fiction: a literary writer who is an exceptional storyteller. This novel never trumpets itself as a metropolitan kaleidoscope, but prefers the quiet intimacy of personal suffering… Put baldly: this is an exceptional performance by a writer whose originality and profound humanity is evident throughout this highly original and wondrous novel.” –Douglas Kennedy, The Independent (UK)

“Let the Great World Spin is beautifully spun, dense with the intense sensuality of being in the world. [McCann’s]… sentences enact that bit of magic that allows you to forget they are there at all, so much so that the novel slips between first and third person as if pouring water from a small jar into a much larger one.” –Minneapolis Star-Tribune

“This exquisitely plotted, wonderfully written novel, so grand in its scope, so close in its observation of human longings and desires, is a reminder to look up — and to look into one another’s eyes.” –Susan Larson, The Times-Picayune

“A shimmering, shattering novel. In McCann’s wise and elegiac novel of origins and consequences, each of his finely drawn, unexpectedly connected characters balances above an abyss, evincing great courage with every step.” –Donna Seaman (Starred Review – Booklist)

“McCann’s novel opens with a stunning five-page set piece about a tightrope performance that was called “the artistic crime of the 20th century. He weaves an ambitious mosaic… [and] sideswipes readers with language” –Bob Minzesheimer, USA Today

“…A scene-stealing spectacle that’s hard to tear your eyes away from…and ends as stunningly as any novel I can remember. McCann’s power — his language, his human understanding, his vision—holds us in an embrace as encompassing as the great world itself.” –Margaret Sullivan, The Buffalo News

“McCann has written more than a supremely woven tapestry of imagined lives; through their struggles, he clears a path for healing and redemption from the cataclysm of a later time.” –Adam Dunn, Millwakee Wisconsin Journal Sentinel

“With Philippe Petit’s breathless 1974 tightrope walk between the uncompleted WTC towers at its axis,  Colum McCann offers us a lyrical cycloramic high-low portrait of New York City in its days of burning; Park Avenue matrons, Bronx junkies, Center Street judges, downtown artists and their uptown subway-tagging brethren, street priests, weary cops, wearier hookers, grieving mothers of an Asian war freshly put to bed; a masterful chorus of voices all obliviously connected by the most ephemeral vision; a pin-dot of a man walking on air 110 stories above their heads.”–Richard Price, author of Lush Life

“What a book! Complex and captivating … a very sensual novel.”– John Boyne, author of The Boy in the Striped Pajamas

“In his own gritty and lyrical voice, Colum McCann has lifted up a handful of souls to the light in this big-hearted, adroit and probing novel, and brought forth a spectrum of the painful, the beautiful and the unexpected.”–Amy Bloom, author of Away

“Every character … grabs you by the throat and makes you care. McCann’s dazzling polyphony walks the high wire and succeeds triumphantly.”–Emma Donoghue, author of The Sealed Letter