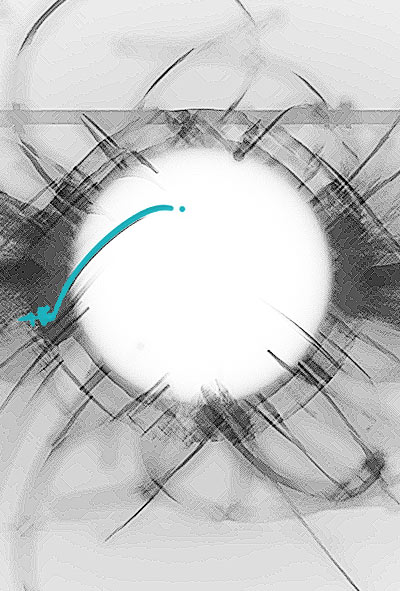 This essay was originally written for the 2015 White Light Festival at Lincoln Center in New York.

In 1963 the Brooklyn-born physicist, Murray Gellman, postulated a trinity of elemental particles that were the building blocks of the world. He called them “quarks” after a line in James Joyce’s  Finnegan’s Wake.

Gellman had a musical intent. He had already decided on the name “kwork” for the fundamental constituent of the nucleon. Like a songwriter, he was searching for a word to make sense of that particular sound. As he delved through Finnegan’s Wake – the most joyous conundrum of language that literature has ever presented — he found the lines: Three quarks for Muster Mark/Sure he hasn’t got much of a bark.  The “quark” most likely referred to the “quawk” of a night-heron screeching across the skies of Dublin. There was something deliciously liquid about the word too: it suggested a “quart,” which rhymed with kwork. Gellman crossed the semantic bridge. Quawk, quart, quark.

The word stuck and prevails today. Everything we touch – in fact, just about everything we can imagine – is made up of quarks. Since the early 60’s the language of science has swerved from Latin and Greek, through prevailing theories of uncertainty, towards the poetic, even the quirky. Nowadays particles can be found in “beauty factories.” They are characterised by “charm,” “spin,” “flavour” and even “truth.”

“Of course it was an Irishman who linguistically split open the atom,” Gellman told me once at a conference in Aspen, Colorado. “Who else but the Irish could have done it?”

Let’s face it. We’re torturously poetic. We’re unbearably self-conscious. We’re awkwardly comic. We’re wilfully ambiguous. We’ll answer a question with another question. We joyfully use three words instead of one. We’ll give you directions towards the exact place you don’t want to go. We’ll walk a hundred miles to receive a good insult. We’re blasphemous. We’re contrarian. We never forget a grudge. We address incomprehension. Our war songs are merry. Our love songs are sad. We have half-doors: we are neither in nor out. And we’re marvellous at spouting rubbish about ourselves. Mea culpa, mea culpa, mea maxima culpa.

But rack up the dramatists, poets, novelists, songwriters and comedians, and the one thing that you can say is that the Irish won’t ever wear black at the funeral of language.

Considering that we’ve colonised and bowlderised and censored and smacked around for a great deal of our history – not least by ourselves — the Irish have a remarkable literary heritage.

Historically, English is not our first language. We used to speak Gaelic, or what we call Irish. This language is Celtic, not Germanic. It is convoluted, onomatopoeic and distinctly oblique if not downright evasive. There is famously no single word in the Irish language for “yes” or even “no”: one has to say “it is so” or “it is not so.” One cannot say, “I am a woman”: rather one says “I am in my womanness.”

This wonderfully evasive nature lends the Irish to great shotgun leaps with the language. There’s Joyce’s “scrotum-tightening sea.” There’s the first drink of the day called “the healer” or “the cure” or “the rozziner” (after the rosin that’s put on a violin bow before playing). There’s the hangover that makes you feel “as sick as small hospital.” There are many Irish words that have become standard in the English language: boycott, hooligan, smithereens, slew and of course whiskey which, literally translated, means “the water of life.”

Our English gets woven on an Irish loom.

Language is a great weapon. In Ireland (as in Scotland and Wales too) we resisted the cool, calm English mould in favour of a more opaque lens. Part of this was a reaction against colonisation. We searched for the images and symbols which were equal to our predicament. Part of it was an attempt not to be subsumed, or to be as unEnglish as possible. Part of it was a linguistic punch to the neighbouring gut.  And another part of it was a reaction to our own disastrous local quarrels, most especially those between the Catholic and Protestant communities both north and south.

We define ourselves with the language we use. It speaks to the past, for sure, but it parts the curtains on the future too. Not matter what we may be doing at any given moment, we cannot forget that our stories about ourselves – our language – has a bearing on our everlasting selves.

Shot through it all is a musicality that practically defines an Irish voice. More than most cultures, the music equals, and sometimes rivals, meaning. It has as much to do with sound as ideas. Hush that bodhran. Go, violin, go.

The poetic voice is intimately connected with the natural voice. Go to any Irish wedding or funeral or birth, there will always be a song. It is unavoidably landscaped into us.

An Irish sentence often tests its own rhythm. Patterns, repetitions, echoes.  The endline enjambment. The dying fall. The search for the perfect word is like dropping a bucket into a well: we wait for the touch, then the splash, then the flow, then the upward haul.

Of course this can become tiresome too. The knife-edge is refusing sentimentality while embracing sentiment. The reader can be lulled into sleep, so that a writer is always aware that it has to be able to destabilise his language, knock all comfortable balance to hell.

The purpose of language is to make us see. It may at first seem ironic that when Joyce was writing Finnegan’s Wake he was also going blind, but — like other blind men such as Borges and Milton  before him — he was aware that language creates the visual landscape from which we then negotiate everything else. In order to “see,” we don’t necessarily need the cornea or the pupil or the iris or the lens, or even the semaphores of light striking the world around us. We need words, and out of this we, then, shape stories. From our stories we fall in love, or we go to war, or we bargain, we mutilate, we annihilate and we invent.

There is a rapture in invention: the fictive spark that accesses our deep imaginations. It is one of the most visceral pleasures known to us. Our words see what our hands do. We not only  discover what belongs, but it seems (at least for a moment) that what we are saying is valuable and by consequence perhaps our lives, in the face of most available evidence, matter too.

There is a peculiar part of the Irish character that is exuberant and needs to be involved in just about everything going on around it. Language is about wholeness.  It is a restless search for contact.  It has a body of sorts – it is represented by both an inside and an outside. Language, then, connects us.  We share it and it shapes us. If we lose it we shall be diminished.

Even for emigrants our language remains: under us still stands the floors of the houses where we grew up. (Just look at some of the great Irish-American writers who have more than a sup in their words: Bill Kennedy, Peter Quinn, Alice McDermott, Cormac McCarthy, Dan Barry, to name just a very few).

All of this could have the winsome air of a nostalgic boast except for the fact that we are a deeply sad race too and that sadness that penetrates virtually all our endeavours.

There is a chaos and despair in being Irish. The sun shines, as Beckett says, on our nothing new. Joyce wrote to his brother Giorgio in 1935 to say: “My eyes are tired. For over half a century, they have gazed into nullity where they have found a lovely nothing.”

We are well aware that we wouldn’t amount to very much if we didn’t have our facility with language. In fact, Jonathan Swift wrote a wonderful satire on the prospect of abolishing words.

At the end of the day, the use of language – or rather the stretch of language — is an affirmative thing. Language induces us to view the world differently. Beckett knew this as much as anyone: “Nothing is funnier than unhappiness, I grant you that. Yes, yes, it’s the most comical thing in the world.”

What is remarkable about the Irish use of language is that, even at its most brutal and raw, even consciously sterile, there is always a thrilling poetic intensity. We have this earth and we have this gift of language and we might as well use it.

After all, it we stay silent we die too. It’s the same outcome no matter what.