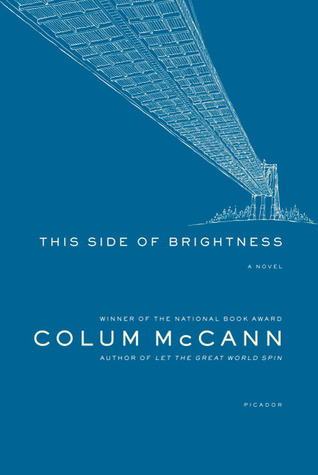 This Side of Brightness

Colum McCann > Books > This Side of Brightness

At the turn of the century, Nathan Walker comes to New York City to take the most dangerous job in the country. A sandhog, he burrows beneath the East River, digging the tunnel that will carry trains from Brooklyn to Manhattan. In the bowels of the riverbed, the sandhogs—black, white, Irish, Italian—dig together, the darkness erasing all differences. Above ground, though, the men keep their distance until a spectacular accident welds a bond between Walker and his fellow sandhogs that will both bless and curse three generations.

“Luminescent. Colum McCann has taken the monumental force of the past and created from it a novel of wrenching emotional dimension, a novel resplendent with dignity.” –The Boston Globe

“Inside the gritty and perilous lives of the men who dug the tunnels under New York’s East River, Irish novelist Colum McCann finds poetry….McCann’s prose shines like the waters of the East River on a bright winter day.” –The Philadelphia Inquirer

“Gritty, disturbing, and powerful . . . McCann is a fiercely original talent and a major one.” –Andy Solomon, San Francisco Chronicle

“A rarity in this cool era-the urban saga with a social conscience, employing the large canvas once used by Steinbeck and Algren.” –Ambrose Clancy, The Washington Post

“It is partly a story of the men who dug and blasted New York’s tunnels and of the high-steel workers who turned horizontal astonishment upon its vertical end, balancing hundreds of teetery feet above the streets to subdue the swinging girders and bolt them together into skyscrapers. Told with gripping realism and subtle detail, the facts–history researched–glow like jewels.” –Richard Eder, The Los Angeles Times