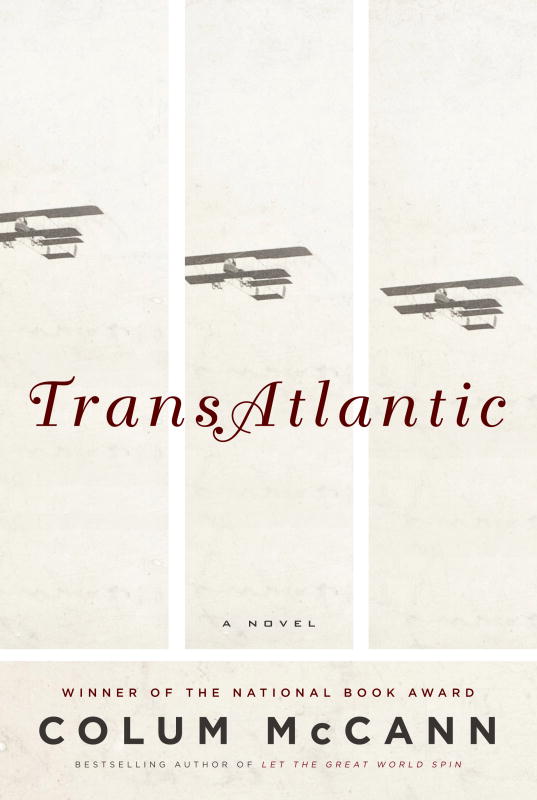 In the National Book Award–winning Let the Great World Spin, Colum McCann thrilled readers with a marvelous high-wire act of fiction that The New York Times Book Review called “an emotional tour de force.” Now McCann demonstrates once again why he is one of the most acclaimed and essential authors of his generation with a soaring novel that spans continents, leaps centuries, and unites a cast of deftly rendered characters, both real and imagined.

Newfoundland, 1919. Two aviators—Jack Alcock and Arthur Brown—set course for Ireland as they attempt the first nonstop flight across the Atlantic Ocean, placing their trust in a modified bomber to heal the wounds of the Great War.

Dublin, 1845 and ’46. On an international lecture tour in support of his subversive autobiography, Frederick Douglass finds the Irish people sympathetic to the abolitionist cause—despite the fact that, as famine ravages the countryside, the poor suffer from hardships that are astonishing even to an American slave.

New York, 1998. Leaving behind a young wife and newborn child, Senator George Mitchell departs for Belfast, where it has fallen to him, the son of an Irish-American father and a Lebanese mother, to shepherd Northern Ireland’s notoriously bitter and volatile peace talks to an uncertain conclusion.

These three iconic crossings are connected by a series of remarkable women whose personal stories are caught up in the swells of history. Beginning with Irish housemaid Lily Duggan, who crosses paths with Frederick Douglass, the novel follows her daughter and granddaughter, Emily and Lottie, and culminates in the present-day story of Hannah Carson, in whom all the hopes and failures of previous generations live on. From the loughs of Ireland to the flatlands of Missouri and the windswept coast of Newfoundland, their journeys mirror the progress and shape of history. They each learn that even the most unassuming moments of grace have a way of rippling through time, space, and memory.

The most mature work yet from an incomparable storyteller, TransAtlantic is a profound meditation on identity and history in a wide world that grows somehow smaller and more wondrous with each passing year.

“What distinguishes TransAtlantic from McCann’s earlier work isn’t the stunning language or the psychological acuity or the humor and imagination on display—all of that has been there before. It’s the sheer ambition, the audacity to imagine within the same novel the experience of Frederick Douglass . . . then the first nonstop trans-Atlantic flight . . . then to leap into the near-present and embody the former senator George Mitchell . . . and finally to unite these stories, to give them even larger purpose than the historical significance they already possess, by knitting through and around them the stories of four generations of women.” —Joel Lovell, The New York Times Magazine

“This novel is beautifully hypnotic in its movements, from the grand (between two continents, across three centuries) to the most subtle. Silkily threading together public events and private feelings, TransAtlantic says no to death with every line.” —Emma Donoghue

“A masterful and profoundly moving novel that employs exquisite language to explore the limits of language and the tricks of memory . . . epic in ambition . . . audacious in format.” —Kirkus Reviews (starred review)

“McCann weaves an intricate tapestry… reminiscent of the finest work of Michael Ondaatje…Transatlantic is McCann’s most penetrating novel yet.” —O, The Oprah Magazine

“Expertly constructed … At its best, as in the superbly rendered early scene of Alcock and Brown’s flight, the prose is poetically vivid.” —The Observer

“Few contemporary writers are better at subtracting the sublime from the base … A kind of cat’s cradle of transatlantic journeys, all connected, all built on another thing.” —The Guardian

“A beautifully woven novel about the real and imagined. Fans of Ian McEwan will love it.” —Red

“McCann is no stranger to literary prizes — but if I were him, I’d start clearing my mantelpiece for a few more” —The Daily Mail

“Ingenious . . . The intricate connections he has crafted between the stories of his women and our men will, by the end, have you trying to figure out, in pencil, what he seems to have written in air, in water, and—given that his subject is the confluence of Irish and American history—in blood.” —Tom Junod, Esquire

“Let the Great World Spin is one of the twenty-first century’s most celebrated novels thus far—with a National Book Award and an IMPAC Dublin Literary Award among its lauds. Not an easy act to follow. But McCann is an acrobat, and TransAtlantic is entrancing . . . Trusting and economic, McCann folds his epic meticulously into this relatively slim volume like an accordion; each pleat holds music—elation and sorrow.” —Tucker Shaw, Denver Post

“Lyrical . . . The prose throughout is vivid and forceful.” —Thomas Chatterton Williams, The Wall Street Journal

“Can the story of the wife of an ice merchant in Grand River, Michigan, compete with the remarkable history of Douglass in Ireland? Indeed. Maintaining the continuity of our interest is the essence of McCann’s talent . . . Under the influence of his serene melody . . . the small, unlikely moments accrue lasting importance in a ‘silence . . . lined with tenderness.’” —Ron Charles, The Washington Post Book World

“Another sweeping, beautifully constructed tapestry of life . . . Like Virginia Woolf, McCann is a master of stream-of-consciousness narrative . . . [His] short phrases overlap, like dabs in a pointillist painting, creating a richly detailed picture that feels like slipping inside the characters’ heads, joining them as they live their lives, if only for a moment . . . Reading McCann is a rare joy.” —Moira Macdonald, The Seattle Times

“[In] this beautifully wrought novel . . . [McCann] expertly juggles a cast of fictional and historical characters.” —“The Must List,” Entertainment Weekly

“McCann moves seamlessly among centuries and generation . . . integrat[ing] his characters’ disparate stories, times and places with astonishing skill. Indeed, our admiration for this feat of literary legerdemain almost causes us to overlook the novel’s other virtues—the depth of McCann’s characters, the beauty of his prose and the sheer power of his story.” —Mike Snyder, Houston Chronicle

“When McCann is engaged with the particularities of place and character, on either side of the Atlantic, he is in the premier league of contemporary novelists.” —Robert Cremins, Minneapolis Star Tribune

INTERVIEWS AND PROFILES FOR TRANSATLANTIC

Colum discusses the book with The Chicago Tribune May 31 2013

Listen to Colum read a section from Transatlantic in conjunction with The New Yorker Fiction Podcast (April 17. 2012)